Thanks to Natacha (from Science Fiction, Transmedia, & Fandom http://wp.me/3Ge0p ) for tagging me in this writing process blog hop!

What Am I Working On?

I am on the umpteenth draft of my latest novel, Hooligans in Shining Armour (working title). My “high concept” logline is: Romeo and Juliet in Belfast. Special thanks to a friend in my writer’s group for that. I spent months and months researching the Troubles, current events, dialect, issues facing youth living on the peace lines, paramilitary, etc. I wrote the first draft in September and since then I’ve reworking it and having members from my Singapore Writer’s Group tear it apart. I’m sending it for development editing by a professional editor in Belfast in a few weeks—so excited for feedback.

Right now I have to sit on my hands and NOT work on Hooligans, so I’ve been focusing on the business end of writing. I’ve put together my query letter and synopsis and started researching agents in the US. I’ve been hardcore working on building my social media platform, which has turned out to be really fun. I’ve met so many supportive writers—a great reminder of how spectacular fellow writers are!

How Does My Work Differ From Others of Its Genre?

I write Young Adult. Obviously, the market is flooded with YA. What makes mine unique? For my current novel, I think it’s the setting. I’d wager most Americans don’t even know that Northern Ireland is a part of the United Kingdom. They have no clue about the sectarianism and tribalism that still divides, that peace walls still separate Catholic working class estates from Protestant fifteen years after the Good Friday Agreement ended The Troubles. 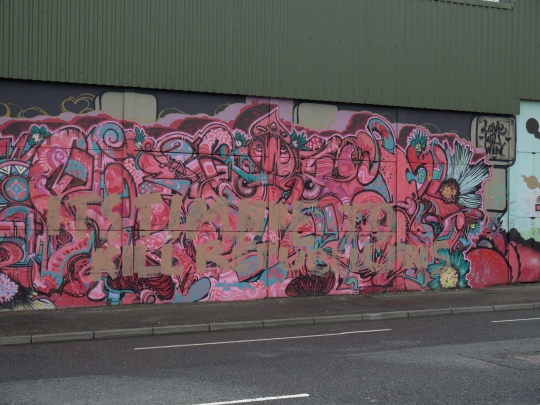 One section of a half-mile-long, forty-foot-tall wall dividing a Loyalist/Protestant neighborhood from a Republican/Catholic neighborhood. Someone painted over the mural meant to beatify the wall: “It’s time to kill all Republicans.”  Picture taken July 2011.

Professionally, I am a school psychologist. I have training and experience in working with kids and teens that have been traumatized by community violence, domestic violence, and substance-abusing parents. I have also worked with gang-involved youths.

Why Do I Write What I Write?

I’ve been writing since elementary school. I still have my first “published” work in a box in my parents’ attic from a 4th grade writing contest. I’ve actually written five manuscripts. The first three will never see the light of day. One is a 200,000 word monstrosity! Eek! I’ve learned so much from those first attempts.

Why YA? There’s just something fascinating and magical about the threshold between childhood and adulthood; an almost infinite number of paths lie ahead of you. You start making choices for yourself and those choices close off paths while opening others. There’s this beauty and innocence and intensity and emotionality that exists during this ephemeral period of life, lost as we morph into adults. Plus, I love working with kids and teens; it’s what I do. I hope my characters will inspire the kids I work with to persevere, make good choices, resist peer pressure, and think for themselves.

So why did some crazy American write a book set in Belfast? I traveled there in July of 2011 over the Twelfth, which is an especially contentious time of year. I won’t go into detail here; visit my Hooligans In Shining Armour page for links to my YouTube channel and my photo album of the trip http://wp.me/P4xRXY-m . Let’s just say I was blown away and needed to understand. Out of my research came the inspiration for Hooligans. You can read a 9 page, double-spaced excerpt on that page as well. Let me know what you think!

Here’s one more picture I took…

Paramilitary mural on the Shankill, July 2011

How Does Your Writing Process Work?

I’ve learned so much about how to write over the past few years. The best teaching experiences have been letting writing friends and critique groups read my work and rip it apart. I’ve also used professional critique services. It was scary at first, but got easier with each go. Now I just hand my MS to fellow writers and tell them to tear into it—and I listen to what they say, all of it. Most times, they’re right.

Character, plot and setting ideas pop into my head at the most random times, running, shopping, riding the bus, doing dishes, etc. Our subconscious keeps working on things even when we’re not aware. I stop right there and type it in my notepad app.

I’ve found that, in order to write a tight, fast-paced story, I need to force myself to plot before I even start. I’ve been loosely basing my plot on the Hero’s Journey from The Writer’s Journey: Mythic Structure for Writers by Christopher Vogler. I fill out an excel spreadsheet with all major plot points. I also have a character development structure I use that really forces me to get into my characters’ heads.

After all that pre-work is done, I hammer out a first draft. My characters and plot morph as I go. Then I re-draft. I discuss my story and characters with my writer friends; their suggestions have completely changed my novel for the better. Then more re-writing and editing. After I feel my story’s in a good place both structurally and grammatically, I’ll have trusted readers read it and give feedback. More re-drafting. More readers. And the cycle continues until there’s an epiphany. I’m quite close to that right now. It’s more like sculpting that writing.

Tag People!  (Sorry, I don’t know how! Tried and failed to figure it out.)