For the past year and a half, I’ve lived in Singapore, writing up a storm, exploring Southeast Asia, making friends from all over (but mostly England, as random as that is). I haven’t been around many Americans. I moved home to Wisconsin last week.

Living abroad has given me a new appreciation of what it means to be American. it’s helped me recognize our unique culture and subcultures. It’s given me the chance to see my country–the ugly, crazy, and beautiful parts–through the eyes of non-Americans, who are fascinated by us. While I was in Singapore, the United States went through the government shutdown (which was SO hard to explain), major gun rights and Affordable Care Act debates, Ferguson, President Obama’s executive order on immigration, ISIS, Ukraine/Russia conflict, and the spread of marijuana legalization and gay marriage recognition (to name a few things). I’m not here to pontificate, but that’s a lot of intense stuff. I also missed a gubernatorial election and I couldn’t absentee vote; that was upsetting. I have to say, prior to living abroad, I didn’t feel particularly proud to be American. NOT living in the U.S. changed that some.

Something really moved when I returned home in October (after eight months away) and again last week when I moved back. My plane landed in Minneapolis (Detroit in October). As I waited in the U.S. Citizen immigration line, looking around at my fellow Americans, it hit me both times. The people in line with me came from many different racial/ethnic backgrounds: African American, white, Latino, a variety of Asian ethnic groups. You can’t identify an American based on their skin color, facial features, or even the language they are speaking.We look different, but we are ALL American. We are the same People.

“E Plurbus Unum”…one from many. There are very, very few countries that would have citizen immigration lines that are as diverse as ours.

It made me proud to be American. 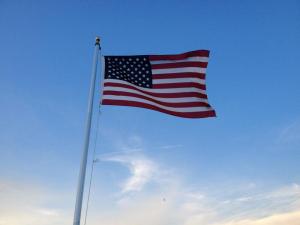 Categories: Expat in Singapore, On being the token Yank Tags: culture, expat, travel

4 thoughts on “My most recent “Proud to be American” moment”