All the Walls of Belfast 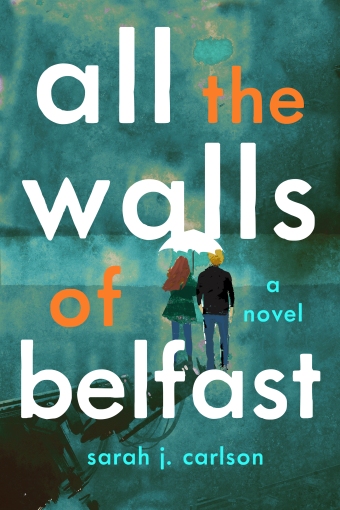 The Carnival at Bray meets West Side Story in Sarah Carlson’s powerful YA debut; set in post-conflict Belfast (Northern Ireland), alternating between two teenagers, both trying to understand their past and preserve their future. Seventeen-year-olds, Fiona and Danny must choose between their dreams and the people they aspire to be.

Fiona and Danny were born in the same hospital. Fiona’s mom fled with her to the United States when she was two, but, fourteen years after the Troubles ended, a forty-foot-tall peace wall still separates her dad’s Catholic neighborhood from Danny’s Protestant neighborhood.

After chance brings Fiona and Danny together, their love of the band Fading Stars, big dreams, and desire to run away from their families unites them. Danny and Fiona must help one another overcome the burden of their parents’ pasts. But one ugly truth might shatter what they have….

All the Walls of Belfast is out now from Turner Publishing Company.

Praise for All the Walls of Belfast

“Compassionate, honest, and hopeful, All The Walls of Belfast celebrates the power of first love to build bridges and scale walls. ~ Marie Marquardt Author of Dream Things True

A  powerful story about how the stones our parents throw in the past make ripples in our futures. ~ Christina June, award-winning author of It Started with Goodbye

“I loved it! The story kept building and building as I was falling deeper and deeper for these characters, Danny and Fiona, the Romeo and Juliet of Belfast…a stellar debut!” ~ Jessie Ann Foley, award-winning author of The Carnival at Bray

All the Walls of Belfast is the gripping story of courage and redemption in turbulent post-conflict Northern Ireland. Brilliantly written, this vivid fiction meets reality novel reveals how two teens navigate life with the fallout of their parents’ actions. ~Angie Stanton, award winning author of Waking in Time

A Barnes & Noble Teen Most Anticipated Indie YA Book of 2019

“Set against the backdrop of the religious tensions in Northern Ireland [Carlson’s] debut features characters with stark religious differences and histories that must be overcome… an endearing story full of pain, love, and strength.” Booklist

“… a young adult romance with real meaning behind it, and it is a welcome addition to the genre.” ~Foreward Reviews

Gr 8 Up-American teen Fiona travels to Belfast, Northern Ireland, to reunite with her father whom she has not seen since she was a toddler. Having no memories of her older half brothers or her birthplace, Fiona tentatively gets to know her family and explores her culture and community. She discovers her Catholic father was formally a key member of the IRA and his bombs killed many people during the Troubles, a time when ethno-nationalism led to violence between Catholics and Protestants. Fiona meets Danny, a Protestant who is studying for his school finals and wishes to join the British Army as a nurse against his gangster father’s wishes. The two begin to see one another, but their parents’ pasts threaten their relationship.

Alternating chapters between Fiona and Danny establish their family dynamics and allow readers to root for them as their believable romance blossoms. Author Sarah Carlson creates an atmospheric narrative, explaining just enough of the current political and cultural landscape to understand how the walls running through Belfast still affect both communities on either side of it. The story doesn’t shy away from showing gritty reality and dysfunctional families that are partly due to the conflicts that ended only recently.

VERDICT This contemporary drama has an appealing romance and the nuanced story may push teens to think critically about religious and cultural differences; and ultimately about forgiveness. A solid choice for all teen collections.-Nancy McKay, Ella Johnson Memorial Library, Hampshire, IL

Add it on Goodreads here.

All the Walls of Belfast is now available.

Learn about the research behind All the Walls of Belfast.

For book trailers, my ATWOB music playlist, and a few of the videos I used while researching, check out my Youtube channel.