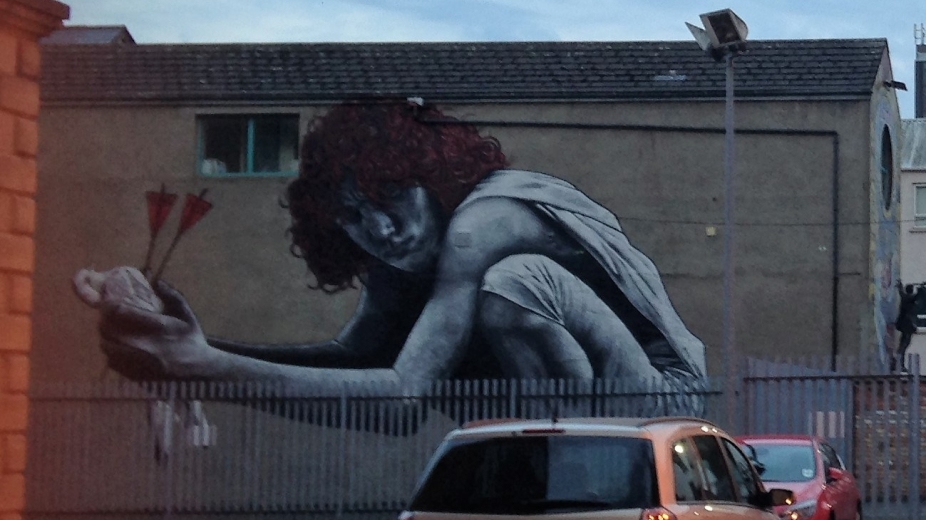 The creation of my debut novel All the Walls of Belfast (out March 12th, 2019 by Turner Publishing Company) was quite an undertaking and would not have been possible without the help of many people and a ton of research. I am an American telling a story that is not mine. As such, I feel it’s absolutely essential to share the process I used to create this story.

I first traveled to Belfast as a part of a group with the purpose of understanding the Troubles and its impact in July 2011. While there, I had the opportunity to go on political tours of the Shankill and the Falls lead by former Protestant Ulster Volunteer Force (UVF) and Catholic Irish Republican Army (IRA) members, attended several different kinds of church services, toured museums, and spoke with many individuals who grew up in Belfast during the Troubles. I also was able to attend an Eleventh Night bonfire in the Tiger’s Bay area of Belfast and the Twelfth of July parade. I did the coastal drive to Giant’s Causeway/Dunluce Castle. Check out pictures of that journey here.

At the time, I had vague recollections of hearing about the Troubles when I was in middle school, but figured it was long over. And it is over. But I was shocked by the walls still separating working class Protestant and Catholic neighborhoods in Belfast. Also, in talking with people, in a lot of cases, things still felt raw and the history is ever-present, especially because those who engaged in violence on both sides held high positions in government. For example, I was quite struck when talking to a woman about the Deputy First Minister at the time, Martin McGuinness, who was a leader in the Provisional Irish Republican Army during the Troubles; she’d had family members killed by the IRA and saw his face all the time as one of the leaders of Northern Ireland and being celebrated as a peace maker.

This trip left me wanting to understand both the history of the Troubles and how it shaped current events and peoples’ lives. I also found a story to tell around the transmission of traumas to the next generation who may not have even been alive during the Troubles. Author’s note: All the Walls of Belfast is set in 2012; the two main characters were small children when the Troubles officially ended in 1998.

As I was researching All the Walls of Belfast, I returned to Belfast again during late June 2015; this time, I stayed in a hostel run by a cross community agency that was on the Falls Road, because I felt like my first time in Belfast I got more exposure to the Protestant/Loyalist side and wanted a better understanding of the Catholic/Republican side. I met up with and worked collaboratively with one of the editor friends I made to explore various setting locations featured in the book. We also attended one of the flute band parades in the Shankill. I went on three personalized, 1:1 political tours of both the Shankill and the Falls, one led by a former UVF member from the Shankill, the other lead by a former IRA member from the Falls; the third was a Catholic black taxi driver (for a slightly more balanced perspective, with very specific sites in mind). This gave me the opportunity to ask whatever questions I wanted about the Troubles and the lasting impact and to get a variety of perspectives to integrate. I toured sites specifically mentioned in the book. I went to various historically/culturally important sites including the Irish Republican History Museum, the Crumlin Road Gaol, and the newly opened Museum of Orange Heritage. Traveling mostly alone, I had the opportunity to capture the perspectives of people everywhere I went, from taxi drivers to hotel clerks to museum workers to friends of my editor friend. I also walked all over Belfast and scouted settings in the book. Pictures here.

Then I returned to Northern Ireland a third time in late June 2016. It also happened to be the day after the Brexit vote. Pictures here.

During these trips, I went to every setting location in the book, even the bathroom of a bus station and inside a Loyalist bar. It was interesting to see how some of some of the murals in the Shankill changed over the years. While writing, I also was constantly Google Maps Streetviewing everything.

All the Walls of Belfast is set in post-conflict Belfast, but understanding historical context is absolutely essential. I spent several years researching the history of the Troubles and specific events such as Bloody Sunday, the Burning of Bombay Street, the Omagh bombing, to name a few. I also studied the history of the Irish Republican Army, the Plantation of Ulster, the formation of the Ulster Volunteer force and other paramilitaries.

As I tried to wrap my mind around the lingering impact of the Troubles, on a daily basis, I tracked current events in Belfast and Northern Ireland (particularly December 2013 through Spring 2016) in local newspapers with a variety of different perspectives, including the Belfast Telegraph, The Newsletter, Irish News, the BBC, and Irish Republican News. I catalogued both UVF and IRA activities from articles to ensure I was accurately capturing a sense of the paramilitary groups and activities. Several of the events in All the Walls of Belfast are based on actual events that happened in 2012, when the book is set, so I read numerous articles and watched newscasts to capture it. I also watched a multitude of videos of riots, bonfires, and flute band parades. I researched the history of things such as the Orange Order, the culture around Blood and Thunder bands, the philosophies of modern day dissident republicans, reports on the impact of paramilitaries on modern day youth (as of the early 2010s), and efforts at cross community engagement and reconciliation.

Additionally, I read research articles about the current status of peace walls in Northern Ireland, their physical structures and how they’ve been fortified over the past few decades; working class Protestant and Catholic youth perspectives on the post-Troubles situation and paramilitaries; educational achievement among boys from Protestant working class communities; and the activities of paramilitaries and their adherence to the terms of the Good Friday Agreement. Then I also researched things like the educational system in Northern Ireland, the process to enlist as a British army officer, clothing styles and brands popular with different classes in Northern Ireland, and even how to open a current (checking) account at Ulster Bank. I researched the meanings of commonly seen graffiti and several of the memorials in both the Shankill and the Falls.

In addition to observations during trips to Belfast, I also did tons of research around dialect, starting with the subtle and obvious differences between American and British English, which are immense, and then taking it further and delving into specifically Belfast dialect. I may or may not have a dialect spreadsheet with over 1,000 entries. I used a variety of forms of media, including books, documentaries, movies, TV shows from Northern Ireland, and Facebook groups. I watched interviews with teenagers from working class Protestant and Catholic neighborhoods to get a sense of their world view. Living in Singapore, where British English is standard, and having many English and Scottish friends, helped tremendously.

I also worked very closely with two developmental editors from Belfast as well as three readers from Belfast to examine how I was capturing culture, language, and perspective (both historic and current). One of my favorite outcomes from this, which I mention in the Acknowledgements, was the “List of Suggested Swearwords” for working class Belfast boys.

Many interesting events unfolded as I wrote All the Walls of Belfast. The decision to fly the British flag over Belfast City Hall only on certain days in December 2012 sparked violent riots and protests that lasted months. In the summer of 2013, a Protestant Loyalist parade being re-routed out of a Catholic area lead to a protest camp being set up for 1200 days near a Catholic area, which also triggered attacks by dissident Republicans against police guarding this camp. In September 2013 Richard Haass (a former US diplomat) worked with Protestant Loyalist Parties, Catholic Republican Parties, and the smaller united parties to try and negotiate resolution around some of the biggest issues hampering the peace process: parades, flags, and the legacy of the Troubles. These talks ended without a deal, with flags and symbols being the toughest area.

Brexit happened. As I said, I was in Northern Ireland the day after the vote. Loyalist areas had signs saying “Vote Leave” and Republican areas had signs saying “Vote Stay.” In talking with a loyalist minutes after he found out, he was happy with the outcome, largely due to concerns around immigrants, but also worried about implications for the economy. Listening to the radio on the drive down the Antrim Coast to Belfast, questions were flying around the unique implications for Northern Ireland: their economic and political ties to both the UK and the Republic of Ireland and what would happen to the border between Northern Ireland and the Republic of Ireland.

In 2018 the power sharing power sharing  government between Republican and Loyalist political parties, created as a result of the Good Friday Agreement which ended the Troubles, also crumbled over disagreements between Protestant Loyalist and Catholic Republican parties. As of now (February 2019), power sharing has still not been restored.

If you want to check out a few of the videos I used while researching, swing by my YouTube channel.